Archimedes' screw consists of a screw (a helical surface surrounding a central cylindrical shaft) inside a hollow pipe. The screw is turned usually by a windmill or by manual labour. As the shaft turns, the bottom end scoops up a volume of water. This water will slide up in the spiral tube, until it finally pours out from the top of the tube and feeds the irrigation systems. The screw was used mostly for draining water out of mines or other areas of low lying water.

In some designs, the screw is fixed to the casing and they rotate together instead of the screw turning within a stationary casing. A screw could be sealed with pitch resin or some other adhesive to its casing, or cast as a single piece in bronze. Some researchers have postulated this as being the device used to irrigate the Hanging Gardens of Babylon, one of the Seven Wonders of the Ancient World. Depictions of Greek and Roman water screws show them being powered by a human treading on the outer casing to turn the entire apparatus as one piece, which would require that the casing be rigidly attached to the screw. 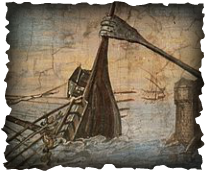 Claw of ArchimedesThe Claw of ArchimedesClaw of Archim is a weapon that he is said to have designed in order to defend the city of Syracuse. Also known as "the ship shaker," the claw consisted of a crane-like arm from which a large metal grappling hook was suspended. When the claw was dropped onto an attacking ship the arm would swing upwards, lifting the ship out of the water and possibly sinking it. There have been modern experiments to test the feasibility of the claw, and in 2005 a television documentary entitled Superweapons of the Ancient World built a version of the claw and concluded that it was a workable device. These machines featured prominently during the Second Punic War in 214 BC, when the Roman Republic attacked Syracuse with a fleet of at least 120 Quinqueremes under Marcus Claudius Marcellus. When the Roman fleet approached the city walls under cover of darkness, the machines were deployed, sinking many ships and throwing the attack into confusion. Historians such as Polybiusand Livy attributed heavy Roman losses to these machines, together with catapults also devised by Archimedes. 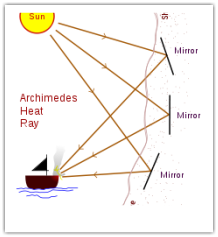 Archimedes may have used mirrors acting collectively as a parabolic reflector to burn ships attacking Syracuse.
The 2nd century AD author Lucian wrote that during the Siege of Syracuse (c. 214–212 BC), Archimedes destroyed enemy ships with fire. Centuries later, Anthemius of Tralles mentions burning-glasses as Archimedes' weapon. The device, sometimes called the "Archimedes heat ray", was used to focus sunlight onto approaching ships, causing them to catch fire.

This purported weapon has been the subject of ongoing debate about its credibility since the Renaissance. René Descartes rejected it as false, while modern researchers have attempted to recreate the effect using only the means that would have been available to Archimedes. It has been suggested that a large array of highly polished bronze or copper shields acting as mirrors could have been employed to focus sunlight onto a ship. This would have used the principle of the parabolic reflector in a manner similar to asolar furnace.


Other Discoveries and Inventions

While Archimedes did not invent the lever, he gave an explanation of the principle involved in his work On the Equilibrium of Planes. Earlier descriptions of the lever are found in the Peripatetic school of the followers of Aristotle, and are sometimes attributed to Archytas. According to Pappus of Alexandria, Archimedes' work on levers caused him to remark: "Give me a place to stand on, and I will move the Earth." Plutarch describes how Archimedes designedblock-and-tackle pulley systems, allowing sailors to use the principle of leverage to lift objects that would otherwise have been too heavy to move. Archimedes has also been credited with improving the power and accuracy of the catapult, and with inventing the odometer during the First Punic War. The odometer was described as a cart with a gear mechanism that dropped a ball into a container after each mile traveled.
Cicero (106–43 BC) mentions Archimedes briefly in his dialogue De re publica, which portrays a fictional conversation taking place in 129 BC. After the capture of Syracuse c.212 BC, General Marcus Claudius Marcellus is said to have taken back to Rome two mechanisms used as aids in astronomy, which showed the motion of the Sun, Moon and five planets. Cicero mentions similar mechanisms designed by Thales of Miletus and Eudoxus of Cnidus. The dialogue says that Marcellus kept one of the devices as his only personal loot from Syracuse, and donated the other to the Temple of Virtue in Rome. Marcellus' mechanism was demonstrated, according to Cicero, by Gaius Sulpicius Gallus to Lucius Furius Philus, who described it thus:
Hanc sphaeram Gallus cum moveret, fiebat ut soli luna totidem conversionibus in aere illo quot diebus in ipso caelo succederet, ex quo et in caelo sphaera solis fieret eadem illa defectio, et incideret luna tum in eam metam quae esset umbra terrae, cum sol e regione. — When Gallus moved the globe, it happened that the Moon followed the Sun by as many turns on that bronze contrivance as in the sky itself, from which also in the sky the Sun's globe became to have that same eclipse, and the Moon came then to that position which was its shadow on the Earth, when the Sun was in line.
This is a description of a planetarium or orrery. Pappus of Alexandria stated that Archimedes had written a manuscript (now lost) on the construction of these mechanisms entitled On Sphere-Making. Modern research in this area has been focused on the Antikythera mechanism, another device from classical antiquity that was probably designed for the same purpose. Constructing mechanisms of this kind would have required a sophisticated knowledge of differential gearing. This was once thought to have been beyond the range of the technology available in ancient times, but the discovery of the Antikythera mechanism in 1902 has confirmed that devices of this kind were known to the ancient Greeks.